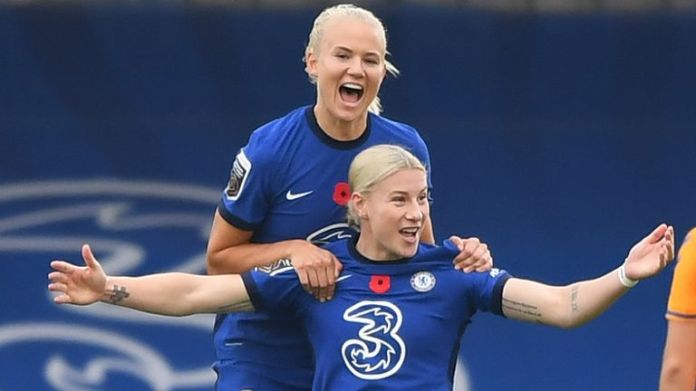 Image:Bethany England scored twice for Chelsea with Pernille Harder also on the scoresheet United controlled possession in the first half, nullifying Arsenal’s front three – including the WSL’s all-time top goalscorer Vivianne Miedema – in the process.World Cup winners and summer signings Tobin Heath and Christen Press demonstrated some sublime link-up play in the early stages, the latter American coming closest to scoring.Looking to inject some much-needed energy into the match, Arsenal’s Joe Montemurro brought on Kim Little and Jill Roord, but it was not enough to get on the scoresheet.- Advertisement – Brighton were without head coach Hope Powell and assistant Amy Merricks, both self-isolating after being in close contact with a member of their back-room staff who tested positive for Covid-19 last week, but almost equalised in the 90th minute when Emily Simpkins’ long-range effort was saved by Lisa Weiss.Villa, though, finished them off two minutes later as Petzelberger scored with a beautiful chipped finished.Emily Van Egmond’s header also gave West Ham their first win in the WSL this season as they edged out Birmingham 2-1.Birmingham went in front after nine minutes. Mollie Green played a through-ball from her own half to Claudia Walker, whose shot from just inside the area found the bottom left-hand corner of the net.West Ham hit back shortly before half-time. Rachel Daly played a short free-kick to Adriana Leon on the edge of the area. Leon’s cross was flicked on by Martha Thomas and Walker headed into her own net.Daly was involved again in West Ham’s winner as her floated ball in picked out Van Egmond in the area and the Australian sent a header inside the left post. 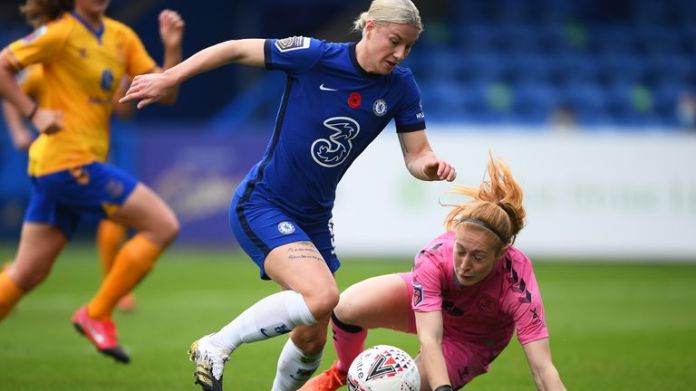 Image:Bethany England rounds Sandy MacIver to score Chelsea avenged their FA Cup quarter-final defeat by Everton with a win at Kingsmeadow.Two goals in three second-half minutes from Bethany England put the game to bed for the Blues and enabled them to leapfrog Everton into third place in the table.- Advertisement – 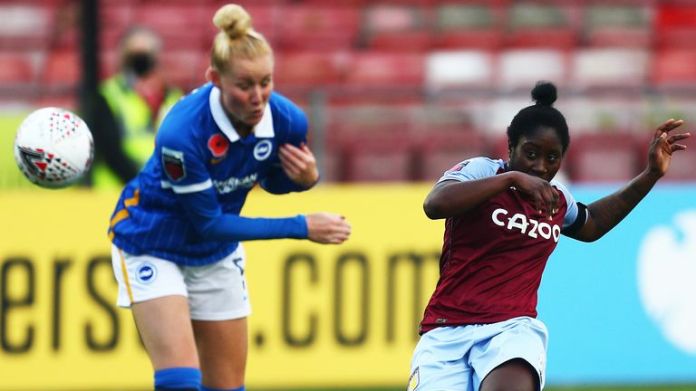 Image:Anita Asante scores for Aston Villa in their first WSL win of the season Chelsea took advantage of a goalkeeping error from Sandy MacIver to take a 15th-minute lead. England blocked an attempted clearance from MacIver and the ball fell into the path of Ji So-yun, who brought the ball under control andfired into the bottom left corner from 20 yards out.England gave the home side breathing space after 73 minutes when she picked up a ball from Maren Mjelde on the edge of the penalty area and drilled home.And three minutes later the game was over when Erin Cuthbert fired a shot against the crossbar and England reacted quickest to head the ball into the net. Chelsea wrapped it up in the seventh minute of stoppage time as Denmark international Pernille Harder struck the ball into the top right corner from the edge of the box.Newly-promoted Aston Villa claimed their first win of the WSL season as second-half goals from Anita Asante and Ramona Petzelberger saw off Brighton 2-0.Gemma Davies’ side had chances to break the deadlock in the first period at the People’s Pension Stadium, with Jodie Hutton unable to take advantage of a one-on-one with Albion goalkeeper Megan Walsh and Stine Larsen denied by a post just before the break.Villa went in front in the 59th minute as summer signing Asante lofted an effort into the net from the edge of the area. Manchester United took over at the top of the WSL table on Sunday as a late goal from Ella Toone sealed a 1-0 win over Arsenal.It took 82 minutes for Casey Stoney’s side to break the deadlock as substitute Jess Sigsworth made a beautiful run before passing to team-mate Toone, who drove the ball into the net with a low finish.- Advertisement – Arsenal’s Lotte Wubben-Moy saw the only yellow card awarded for a rash tackle on Leah Galton in the 51st minute. – Advertisement –